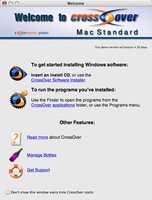 Advertisement
VMWare Fusion, Parallels, or VirtualBox are three tools that allow you to virtualize Windows and run non-native Windows apps on Mac. However, CrossOver lets you run Windows apps natively on Mac without using an emulator. The CrossOver engine is Wine, a free implementation of the Windows APIs for UNIX systems.

To install an app you can either insert a program CD/DVD (CrossOver will automatically detect its content) or select an installation file. Most Windows apps have not been tested, so you can find out for yourself if CrossOver is capable of running a particular app. Use the Run Command option to run a program without installing it.
Reviewed by Álvaro Toledo
Advertisement

There are opinions about CrossOver yet. Be the first! Comment